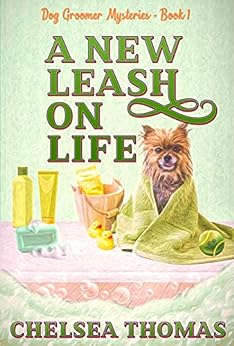 Murder at the pet salon.

"I’ve been waiting for this new series from Chelsea Thomas forever and I LOVE it. All the adorable animals are so much fun, and the suspenseful mystery kept me turning the pages for hours."

When heartbroken Amy finally moves back to her home town, the plan is to open an adorable little pet salon with her grumpy granny, Petunia…

…but a dead body can ruin even the best laid plans.

Amy is upbeat, optimistic, and filled with sunshine. She’s great with animals and loves her job as a groomer. But if this murder isn’t solved, her business could go under before it even opens. Amy’s got too much fight to let that happen, so she recruits Grandma Petunia, and the two of them set off to catch the killer and save the business, before it’s too late.

Petunia is a tough old broad with a talent for poker, which means she’s an expert at reading people and situations, and she can always detect a lie. Plus, she’s got decades of history in this small town, so she’s the perfect sidekick for Amy’s inaugural murder investigation.

Rookie cop Liam Snow went to high school with Amy, and they were enemies back then. Now that Amy’s poking around an official police investigation, they’re still enemies…but there’s also romantic chemistry that can’t be denied. But would Officer Snow lock Amy up for a crime she didn’t commit?

If Amy and Petunia aren’t careful, they could end up in jail for this murder…or worse. Because this killer doesn’t show any signs of backing down. And small-town life can be far more dangerous than it seems.